​
Dr. Ryan grew up in Lincoln, NE.  As a youth, he actively participated in sports which lead to him developing a great love for wrestling.  Dr. Ryan’s success in high school wrestling allowed him to continue his wrestling career into college.  He attended the University of Nebraska Kearney where he became a two time NCAA All-American and a three time Academic All-American.  He has been able to continue his love and passion for wrestling by staying active coaching high school and youth wrestling.

A knee injury prematurely ended Dr. Ryan’s college wrestling career.  Dr. Ryan however believes that when the Lord closes one door another door is opened, which happened to be a chiropractor's door.  As an undergraduate student, Dr. Ryan began working in a chiropractor’s office and his passion for chiropractic was born.  “I always wanted to help people; that is what drew me to chiropractic.  The benefits I gained under chiropractic care were so awesome; I couldn’t wait to share that with as many people as possible.”

Although Dr. Ryan experienced great success both athletically and academically, his greatest accomplishment in college was meeting and marrying the love of his life, Crystal.  After graduating from college they packed up and moved to Davenport, IA to begin his journey in becoming a chiropractor.

Dr. Ryan and Crystal are excited to begin their new journey in Hoxie.  Their deep faith in Christ guides their path, and they are excited to serve this community.  In their spare time you can find them enjoying the outdoors with their children Joleen, Boaz, Malachi and Nevaeh, spending time with friends and family, hunting, and cheering on the Huskers. 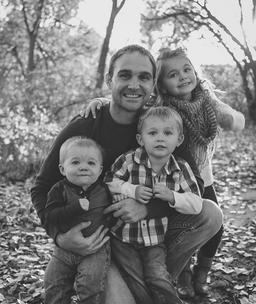 Dr. Ryan graduated from Palmer College of Chiropractic in Davenport, IA.  Following graduation he started his career practicing with a chiropractor in Beatrice, NE.  After gaining great experience and sharping his chiropractic skills in a fast paced high volume practice, Dr. Ryan and his wife felt called to begin a new journey serving the community of Hoxie.  Dr. Ryan has a big passion for helping maximize people’s health so that they can live a more full and enjoyable lifestyle.